How often do you have the opportunity to watch a woman make the transition into her Crone skin?

In 1975 photographer Nicholas Nixon took a picture of four sisters standing side by side. From then on he took a photograph every year, for 40 years. The collection, which has traveled the world over the past four decades, is on display at the New York Museum of Modern Art until January 4. In November the museum also released the book The Brown Sisters: Forty Years. 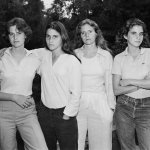 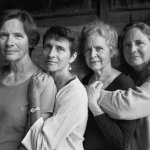 There is more to this exhibit than chronicaling the passage of time. In each woman’s posture, the lines in her face, the look in her eye, her contact with the sister next to her, we see how she has grown into herself and found her place in a family group. I can think of no better description of attaining Cronedom. To see all 40 years recorded and read Susan Minot’s evocative text in the New York Times article, click here.