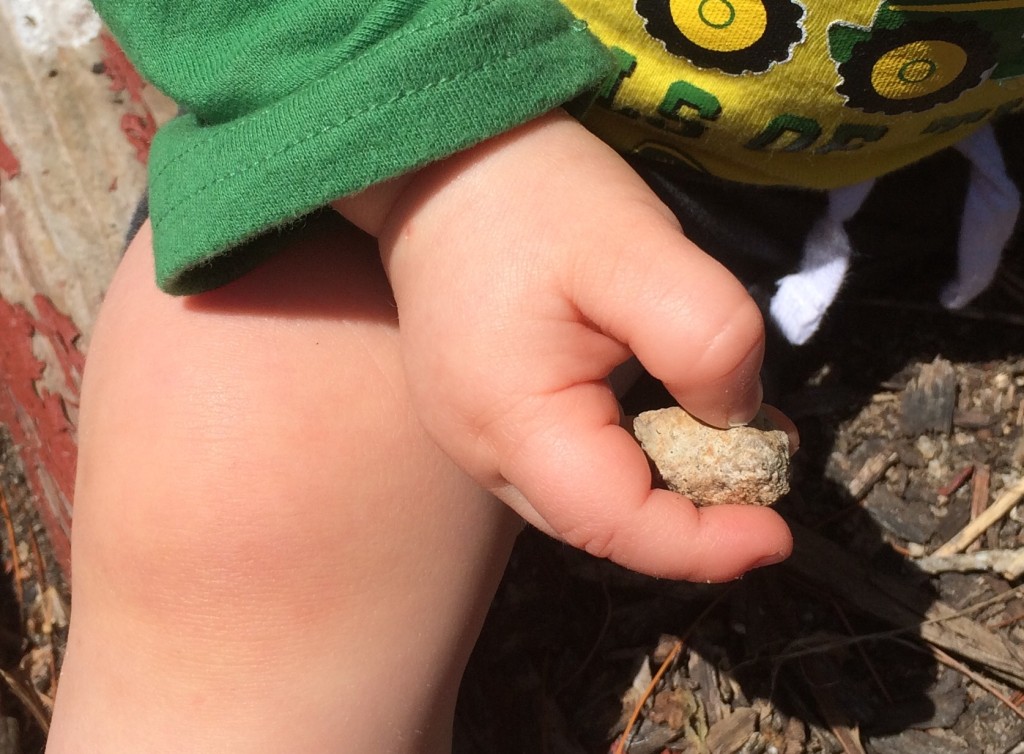 Sometimes to fully appreciate God’s creation you have to get down low. Baby low.

As winter loosens its protracted icy grip on the Midwest, the first few days of spring that slip through are precious and long awaited gifts. Today I need a gift or two.

My toddling grandson is teething, clingy, and bored with the toys within his reach. He doesn’t understand that all the fascinating things Nana has placed on higher shelves are there for his own safety. He drops to the floor, wailing in rejection and despair. He scoots along the carpet on his face. Nana is so mean.

Time to go outside.

My husband has put up a tree swing for our little guy, and while he enjoys the movement, there is so much more to see outside that is not accessible from so high up, and his reaching and pointing tells me that he wants to see what’s on the ground.

I do a good job picking up the dog poop, and I use only home-made organic bug killer and fertilizer, but we don’t have a green, well manicured lawn. Part is a paved turn around for the drive, part is planted in flowers and herbs, part is a brick patio, and part is a sculpture garden covered with pea gravel. There is no grass. Where to put a baby?

I let him tell me.

He thinks the pea gravel looks interesting, so I set him down in the middle of a patch, and he runs his hands back and forth, rolling the small stones. I do too. They feels nubby and cool, and the layers get colder as we get closer to the dirt below. Then our little man decides he will toss the little stones onto the brickwork. That’s okay. I can sweep them off later. I throw a few stones, too. Their tiny, round, gray shapes are an interesting contrast against the larger, squared off red brick. I study the pattern this juxtaposition creates within the checkered shadow of the overhanging trellis.

Now we scoot over to a flower bed. In a couple of months it will be resplendent with pink, white, and burgundy hibiscus as tall as sunflowers, swaying above my head. For now we have only the pronged stumps of last year’s plants ringed with the spiky green shoots of this year’s growth. Around them are the twigs and bark dropped by  the nearby elms, and shreds of old mulch. The landscape is predominantly gray.

But he finds it fascinating.

He fingers various chunks and shreds of mulch, feeling the edges (and don’t tell his mother – but, yes, he tastes some). He holds bark in one hand and a stick in the other, comparing their heft. He gives me twig after twig so that I can snap each in half and return two pieces in place of one. And then he gives me something brown, fragile and skeletal, something I don’t recognize immediately. Turning it over in my hand I see that it is a dried and shriveled hibiscus seed pod. I break it open and show him all the tiny seeds that fall out into my palm before I toss them into the breeze to scatter and take root. How can such little seeds produce such majestic plants?

Perhaps in the same way that little children become beautiful and heroic adults.

I see my garden differently today.

Before today I saw the pea gravel was something to shovel, rake, and weed. Today, running my hands through the stones is as tranquilizing as contemplating a zen garden. I am used to looking down on my plants, inspecting them for new growth and insects. Today I see them from the level at which they first emerge into the light. Shadows are art forms. Seed pods are magic.

Today I am able to sit on the ground in my garden without planting, weeding, or watering. I can soak up the sun and notice what I had not noticed before. I am aware of my grandson’s quiet and sustained focus on the objects around him. He doesn’t need flashing lights and electronic music to hold his interest, nor pieces of neon plastic molded in China.

We have been playing in the dirt, and we are dirty.

We have twigs, dried leaves, and mulch clinging to our socks and pants. My grandson’s knees are scraped, his fingers muddy. He is content. I can’t remember the last time I felt so peaceful and happy. Maybe it was when I held his mother in my arms and lifted her up to feel the wind on her face for the first time.

Thank you, little man, for showing me the world at your level.

Let’s do this more often.