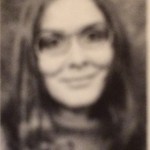 A very blurry yearbook picture of Tattooed Nana in 1973 giving it her best Gloria Steinem.

The Twenty-first Century Crone isn’t merely defined by age or reproductive status. She has also achieved, often by battling great odds, her self-awareness and self-liberation.

Oprah, for all her battles and victories is no Crone.

No haters, please. Let’s get this out of the way: Oprah Winfrey has done much good in the world. Her philanthropic work is legendary, her political activism has shone a light on important issues for women and girls, and she gave away some pretty dandy prizes on her show. She gave us Dr. Phil and Dr. Oz. She’s living proof of hope fulfilled for the upward mobility of women of color. Upward to the tune of over $2 billion. With a “b.” Sadly, race and gender still throw up walls in our country, and Oprah has scaled them like a Valkyrie. Like a mogul. Like a boss.

Oprah’s a role model for girls, ambitious young women, and…well, just women, right? Don’t you want to have a  monthly magazine named after you so you can smile on each cover in professionally applied make up and an upbeat seasonal outfit all lit to perfection? Throw in a bunch of daffodils or a pumpkin pie and it’s the ultimate selfie, right? Right. And there’s the break. Crone’s aren’t hung up on selfies.

Always a trendsetter, Oprah became dazzled by the Facebook mentality long before the rest of us were misrepresenting ourselves on Facebook.  That kind of reality break is bound to happen when someone becomes so famous that her last name becomes superfluous. My last name isn’t superfluous, and I bet yours isn’t either. Last names are how we mainstream Americans exist legally, financially, and socially in mainstream America.

Oprah left the mainstream so long ago that she went off the rails, and doggone it, she took my beloved Gloria Steinem with her.

Let’s step back a few years. In November of 2008 I got married for the second time, and went through the legal steps to take a new last name. Not so feminist, but I had my reasons, and they’ll show up in another blog.  I got my wedding dress from Nordstrom online clearance, my hat from Macy’s, and my shoes from Value City. I made all the floral arrangements with items I got from Michaels and Dollar Tree. A  kind friend helped me decorate the sanctuary and loaned me her ruby jewelry to compliment my red outfit. The cake came from Sam’s Club and the rings from Overstock.com. (These are not paid endorsements, by the way, but if any of their reps are reading, I wouldn’t mind a coupon or two.)  My son-in-law designed and printed the invitations and downloaded our music onto a CD. I did my own hair, nails, and make up. The day before the wedding we hosted an open house for our out of town guests. I did the cooking, the set up, and the clean up afterward. Do I want a medal? No. Given our budget at the time, that’s just how it had to be. We wanted a beautiful, memorable event, and we wanted our guests to be well treated. Mission accomplished.

A month earlier, Thursday, October 16, 2008, to be exact, Oprah hosted a show covering the California Women’s Conference. Her guests were Maria Shriver, Billie Jean King, and Gloria Steinem. What an event! California! Beaches! Beautiful weather! Wine country! Celebrities! Wealth! What a line up! Famous women! Shriver! King! Steinem! Raised in an Irish-Catholic home, I was bred to admire the Kennedy/Shriver clan. It’s genetic. Contrary to Irish Catholicism, I was a budding, if spluttering, high school “women’s libber” in 1973 when tennis sensation Billie Jean King beat Bobby Riggs, and her strength and grace gave articulation to my speech class debates. Hear me roar, adolescent males! And Gloria Steinem. Gloria in excelsis. Gloria.

Gloria Steinem was my idol, my role model when I was a teenager.

She didn’t take crap from guys, and she said I didn’t have to, either. She wrote exciting words about women who defined themselves through their ideas and talents, not through their relationships with men. Gloria Steinem wore pant suits when my school dress code made me wear dresses. Bonus – She made my dad fume. I copied her long hair with the center part. I got aviator frames for my glasses and tucked the ear pieces over my hair. She gave me a new name when she coined the prefix “Ms.” Who blinks twice now when they hear someone introduced as “Ms.” ? Even though I took my husband’s last name he still puts “Ms.” in front of it when referring to me formally. In my daughter’s baby box is a copy of Ms. Magazine from the month she was born with astronaut Sally Ride on the cover.

Thursday, October 16, 2008, I settled down in the recliner and flipped on the TV, taking a break from work and wedding planning. I cruised through the channels, and there was Oprah introducing – Gloria Steinem. The 70+-year-old pioneer feminist came on stage looking stunning as ever: same trim physique, same trademark hair and glasses, same high wattage smile. Over the din of applause and cheers, Oprah bellowed, “This is what 70 looks like! This is what 70 looks like!” Close up on smiling Gloria, cut to Oprah’s effusive congratulations to her for being so…well…so well preserved.

*Sigh* I turned off the TV and returned to my discount wedding. I just couldn’t listen to any more conversation from the crowd living in the rare air. I know these women mean well. Billie Jean King in particular is a humble, self-effacing individual. I know that they move among and are the policy makers who can and probably do impact my life. They’re trying to help me. But after living at the higher altitudes for so long, do they understand me? I doubt they do. No, after Oprah’s outburst, I’m sure she doesn’t.

I work with a woman who is 78, two years younger than Gloria Steinem is now. She never went to college or wrote a speech. She was widowed years ago and lives on a fixed income. She’s been wearing the same wardrobe for at least a decade. She learned to drive at age 66 because she had to. She’s a breast cancer survivor who works out with 10 pound weights. She can scamper up and down a ladder with the agility of a squirrel. She eats well because she works like a Trojan in her garden. In tragedy and triumph she is steadfast in her faith. Her children and grandchildren adore her. Everyone who passes the time of day with her leaves her company feeling recognized and appreciated. She’s proud of the way she has taken charge of her life because she knows life is not a challenge to be feared, but she is still a humble individual because she knows you can’t always call all the shots. If you just passed her on the street or sat next to her in church you wouldn’t look twice, because on the surface she looks like an ordinary old woman. But who gives a flying flip about looks when you need a friend – a role model for your Crone years?

My role models have changed since I’ve grown up.

My co-worker will remain anonymous. I won’t name her because, as I said, she’s humble and modest and doesn’t like to be the center of attention. You’ll never see her on air with Oprah because Oprah doesn’t know people like my friend and co-worker. And I don’t think Oprah could successfully navigate such a modest life and revel in modest rewards. That’s why I don’t want Oprah and other women with no last name telling me “what 70 looks like,” or what my diet should be, or what shoes I should wear. Get out of my life, Oprah. You’re no Crone, and you never will be.

Thursday, October 16, 2008 – six and a half years ago. Why does this still stick in my craw? Maybe because I’m getting closer to 60 and thinking about 70. Or maybe because I’m so discouraged that we older women who should know better still look to celebrities for a sense of self when we have heroines walking among us and breaking bread with us. Turn off the TV and talk to your neighbor, your mom, your aunt, your co-worker. Stop reading someone else’s magazine and write your own life’s story. You might just amaze yourself.

The Twenty-first Century Crone isn’t merely defined by age or reproductive status. She has also achieved, often by battling great odds, her self-awareness and self-liberation. And she does it without an audience, without an artificial representation of her self, and dammit, she can do it without a lot of money.

Being a Crone is an inside job.